Drones and 5G: Having discussed mobile connectivity and 5G networks in our previous post, we now turn to how 5G mobile networks can help the drone industry. Current mobile networks are capable of serving drones in the low-altitude airspace which seems to be a perfect fit since drones fly rather low and cell coverage above buildings, trees, etc. is very good. Specific performance enhancements can optimize 4G or 5G connectivity toward more effective and efficient connectivity for drones while maintaining the performance of mobile devices on the ground. In principle, there are three major needs for connecting drones by means of 5G cellular data: UTM, BVLOS flights and sensor data transmission.

One of the biggest challenges in the near future in the drone ecosystem is both the regulation of the drone traffic itself and its integration with the manned aviation. A large number of drones are already today traveling through the airspace and this number is forecasted to grow. In order to further exploit the potential of drones and enable promising drone applications, it is important to find a fair and structured solution that regulates the traffic of drones and integrates them into controlled airspace.

For these reasons, aviation authorities around the globe have initiated programs to define the rules of drone operation, in an effort to address the safety issues regarding the commercial use of drones. This includes mandating drone traffic management systems similar to the air traffic control systems of manned aviation. For example, Unmanned Aircraft Systems Traffic Management (UTM) is the system under definition by the FAA, while a similar concept called U-Space is under development as a joint project of the European Union. Because of their (future) coverage, their globally standardized technology, their highly developed capacity and capabilities, and their established procedures for users, cellular networks are candidates for the establishment of a controlled and reliable system for drone operation.

Mobile networks are well suited to support low-altitude drone communication and to be integrated with drone traffic management systems to enhance the safety and security of drone operations.

Flying Beyond Line of Sight (BVLOS)

Current regulations are usually restricted to low-altitude operations (below 120m or 400ft) and within the visual line of sight of a human pilot who is in permanent control of the drone.

Nevertheless, many drone applications are only viable when the drone is either be flown beyond the visual line of sight or when it flies autonomously, which usually means that the platform is out of sight and without direct control of the pilot.

Today, drone radio remote control systems are based on specific radio connections or Wi-Fi with a limited range of usually under 3-5km or are programmed and fly off certain waypoints, cellular networks can provide connections over unlimited distances provided that the drone has a cellular network coverage and can be controlled from basically anywhere in the world. A standardized cellular network with widespread coverage could provide comprehensive, high-quality and secure connectivity that enables cost-effective drone operation beyond the line of sight.

Want to Know More About Drones and Connectivity? Check Out Our Dedicated Page

For some drone-based applications it is important that the data is transmitted to ground stations beyond the remote-control station of the pilot. This could be either for example live broadcasting of the drone’s camera or saving time for data processing.

Since it is often a large amount of data, a data connection with large and fast bandwidth is required, which could offer stable 5G network coverage.

For a safe and effective usage from drones, on the one hand, there must be a comprehensive network coverage in place.

According to a measurement by OpenSignal.com, South Korea has 97.5 percent network coverage of the current 4G network, followed by Japan with 94.7 percent.

Other drone industry leading nations like France or Germany still need to expand their cellular infrastructure as they only have a coverage of 68.3 and 65.7 percent respectively.

Solutions need to be developed on how to handle situations when drones lose connectivity via cellular mobile networks. Another important thing to consider is that most mobile networks are designed for best coverage on a terrestrial level. The availability of the coverage and bandwidth up to the lower part of the airspace must be analyzed and guaranteed.

The mobile network does not only need to have a good coverage, but also must be stable. That means that with increased data traffic capabilities which come with the 5G, a sufficient bandwidth must be ensured so that the drone does not constantly loses network or can broadcast a live video in high quality.

A stable network, together with a wide network coverage, also ensures a continuous connection the drone is flying.

What happens if the drone constantly loses network or if the bandwidth is simply not sufficient for live video broadcasting in the middle of a live feed?

Mobile networks can be the solution for several issues the drone industry has to deal with, but it still needs to be fully integrated in the ecosystem. All drones must be equipped with the mobile communication modules and 5G infrastructure must be in place.

Although the technology comes with great benefits, it still needs to be considered that there is no guarantee of 100% coverage and bandwidth and further testing is required. Currently, mobile networks are designed and optimized to serve users at ground level. New and specific challenges of drones operating as mobile terminals in airspace are expected to arise.

Download our FREE Drone Applications in the Coronavirus Crisis Infographic

This infographic, “Drones and 5G Applications”, gives an overview of all the key ways that 5G helps us leverage drone applications. 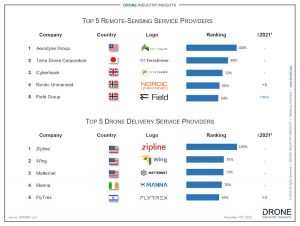 5 min. The top 20 best companies for drone services in drone delivery and remote sensing in 2022 are… 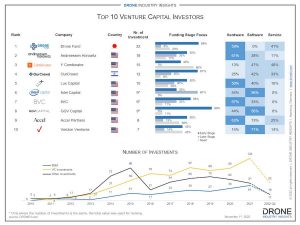 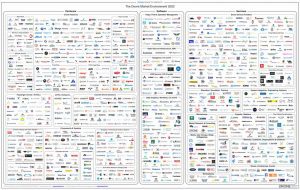 Drone Market Map: the Drone World in an Infographic

4 min. To mark the release of the new update of our flagship infographic, here is a brief article on its content as well as the complementary drone company database 2022. 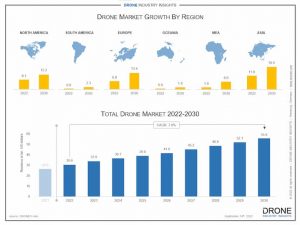