2019 Drone Investments: Rounding off another fiscal year, we bring you the key trends and developments in drone investments in 2019.

1. Another Year, Another Record – 2019 Drone Investments

2019 was a record-breaking year in many ways. The total yearly investment value not only broke last year’s record but also surpassed the billion mark, as $1.2 billion was invested into the drone industry in 2019. As our graphic shows, venture capital (VC) investments once again made up a large portion of this sum. And indeed VC deals also broke the record in 2019, with $830 million invested, up from $679 million in 2018. Finally, eleven years since our first recorded drone industry investment, we can now say that a whopping $4.443 billion has been invested into the drone market.

2020 Outlook: As the market continues to grow, we expect 2020 to be yet another record-breaking year, with both overall and VC deals reaching new highs. We also expect to see the continued trend not the number of investment deals growing drastically but the value of each investment instead.

2. Passenger Drone Companies Are Cashing In

If there were to be an obvious “winner” according to investment figures of 2019, it would be the passenger drone companies. In order to showcase the vast differences in cash injections into different sectors of the drone industry, this year we split it four ways into: drone, passenger drone, counter-drone and UTM companies. These four sectors are currently in vastly different maturity stages, as well as at different points in the Gartner Hype Cycle and likely to experience very different technological and regulatory hurdles.

Undoubtedly, as carriers of humans, passenger drones are and will continue to be subject to the very strictest certification and regulation requirements as well as the highest technological hurdles. It is precisely because of this that companies are still in the R&D and prototype manufacturing stage, the one which requires the most money. Combine that with the hype around Urban Air Mobility (UAM), and unsurprisingly passenger drone companies are cashing in more than all the UTM and counter-drone companies combined!

2020 Outlook: This sector will become increasingly popular not only in terms of the rising number of passenger drone concepts, but also government funding for smart city and UAM initiatives, and the plethora of conferences devoted to the topic. For this reason, we are likely to see passenger drone companies scooping a large portion of the cash again in the coming year. In fact, Joby Aviation alone with their $590 million Series C round in January 2020 has already broken records and is likely to make up a large part of the total of 2020 investments.

Download a FREE Sample of our Drone Investment Report 2020

Find out more about our Drone Investment Report and download a FREE sample.

The medical drone delivery service provider, Zipline, stole the show last year not only by vastly expanding their operations but also by receiving an all-time record investment of $190 million in their Series C round in April. Following this funding round the company was valued at $1,5 billion and ranked as the Top Drone Service Provider on our list last year.

2020 Outlook: We expect to see an increasing number of investments into drone delivery companies, as the market not only grows in terms of companies and solutions but also matures in terms of scale of operations, certification and sophistication of solutions available. With the recent Part 135 approvals given to Wing and UPS Flight Forward, and other regulatory milestones across the globe this space will grow significantly this year.

Want to Know More About Drone Investments? We Can Help.

While Zipline made headlines with their $190 million cash injection, the US-based sensor manufacturer FLIR acquired the platform manufacturer Aeryon Labs for $200 million. This purchase in addition to other M&As of 2019 signals a consolidation of the commercial drone market. M&As are becoming a form of expansion of company operations as companies increasingly use this as a growth model. Terra Drone, in particular, has done this through several key acquisitions in 2019 which brought them up to the No2 ranking on our Drone Service Provider list last year. Following this purchase, they are now in the harmonization phase whereby they integrate the services offered across the globe into one streamlined global service company.

2020 Outlook: This will continue to be a trend in 2020 as larger companies look for new opportunities for geographical expansion and for creating new and improved solutions for their clients. Look out for funding rounds into bigger companies followed by M&As, such as the case with Aerodyne in late 2019.

This infographic gives an overview of the drone control connectivity evolution over the years and the relationship between 5G and drones.

5. The Drone Market Continues to Grow

Finally, while the above figures alongside our other research show that the market is growing vertically, there are also signs of significant horizontal growth. In other words, as drone adoption spreads across the globe, so do drone investments – with new markets and companies receiving record shares of the total investments in 2019. The same goes also not only for the recipients of the funding, but for the investors themselves as interest in the commercial drone market grows.

Meanwhile, other than geographical diversification we are also seeing an increasing number of drone companies venture into partnerships with non-drone companies in order to offer new and unique solutions.

2020 Outlook: It is likely that in 2020 we’ll see a further growth of some new markets, especially the Indian, Israeli and Southeast Asian markets which we’ve seen soar in the past couple of years. Finally, expect innovative new solutions on the drone market as the non-drone partnerships begin to bear fruit.

Besides his financial oversight, Hendrik is an expert in aviation law and UAV regulation with more than 10 years of experience. Not only does he consult on all regulation questions, but Hendrik also writes the yearly drone investments report. Prior to launching DRONEII, at Lufthansa Technik he was the single point of contact to Civil Aviation Authorities (CAA) of Germany, Middle East and Asia. 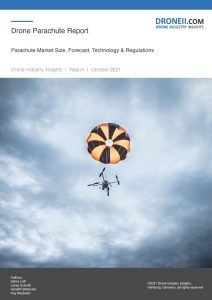 A Glimpse of the Drone Parachute Market 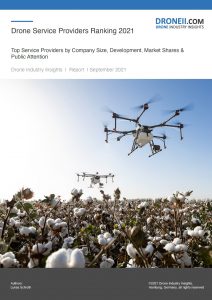 The Top Drone Service Providers of 2021 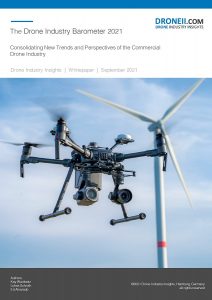 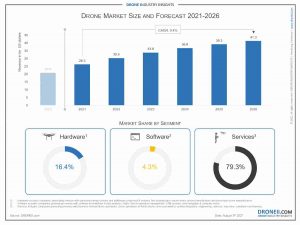 The Drone Market in 2021 and Beyond: 5 Key Takeaways